Tell TIAA To Get Out of the Land Grabbing Business!

Is Your Pension Fund Making Money Off the Backs of Family Farmers?

Ask any family farmer and they will tell you that land is an increasingly valuable, scarce, and critical resource for their survival. Many people would also agree that equitable access to land not only provides economic security and food sovereignty, but also makes political democracy possible. 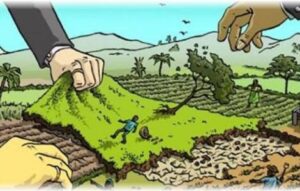 If this is true, then why are fewer and fewer entities being allowed to control more and more of our land in the United States? A century ago over 90% of farm land was actually owned by those who tilled it, but today that amount is under 50%. In the next decade over 400 million acres of U.S. land is expected to change hands – but who will inherit this amazing wealth? Sadly the major buyers of farmland today are not family farmers, but hedge fund managers and foreign holding companies.

This modern day unsettling of America, to invoke the famous rural author/activist Wendell Berry, is driven by an insidious phenomena called land grabbing.

And one of the major agents of global land grabbing is TIAA, a giant investment firm that manages pension funds for public employees of many respected institutions – municipalities, universities, museums, hospitals, even National Public Radio. In fact, TIAA is responsible for over 5 million retirement accounts for 16,000+ institutions. TIAA also manages the college savings plans in 10 U.S. states – including the $4 billion Eduvest Fund in WI, another vast pool of capital for them to deploy.  Many academic leaders, such as UW-Madison’s own Chancellor, Rebecca Blank, hold seats on TIAA’s board of governors and are thus ultimately responsible for its less than ethical behavior.

Being global, TIAA has access to funds in other countries, as well – such as retirement accounts of workers in Canada, Sweden, Germany, and the UK.Following the global financial crisis of 2007-2008, portfoliomanagers realized that farm land was still ascarce resource and actually had a higher return rate (11-12%) than many other conventional investments such as shares and bonds traded on Wall Street.In fact, the average price of U.S. farmland has doubled since 2000. The upshot is that TIAA now owns over 250,000 acres of farmland in the U.S. worth an estimated $4 billion, and has earmarked even more towards acquiring farmland worldwide.

Land grabbing is nothing new – think of the enclosure movement of Medieval Europe where wealthy elites moved into rural areas to privatize the commons, violently evicted peasants, and prompted resistance from grassroots groups like the Diggers and legendary heroes like Robin Hood. Modern day land grabbing is now taking advantage of this earlier process of turning land into a market commodity, enabling absentee owners to speculate on its future value no matter how the farm land is currently being used or who depends upon agriculture for their livelihood.

Not being able to pay for rising rates on rented land is one of the reasons that family farmers go bankrupt, and for many beginning farmers being able to scrape together enough money to actually buy a property is now a distant dream. The cruel irony of land grabbing thanks to outside speculators like TIAA is that the retirement of a rural public school teacher may now depend upon the bankruptcy of the farm kids in their very own classroom.

History has shown time and again that rampant speculation drives up market prices. In Nov. 2012 Swiss-based UBS Agrivest quietly bought 9,800 acres in Grant County, WI for $67.5 million – that is a whopping $7,000 per acre, well above the average WI price of about $5,000 acre. This is the largest single land swap in modern WI history since Finnish timber giant, Stora Enso, offloaded its 309,000 acres of forest land in WI and the UP of MI to Plum Creek for $142 million back in 2002. On the short list to buy the same land was TIAA, which instead spent $21.2 million on 3,562 acres in Adams, Portage, and Price Counties. In 2014 another mysterious speculator from Canada bought 8700 acres in Wisconsin’s Manitowoc County for a whopping $19 million. In 2017 the Hancock Timber Resources Group (HTRC) quietly acquired almost 79,000 acres of forest in northern WI, adding this to its global portfolio of 5.9 million acres.

Of course, turning our most important productive asset into a casino is highly reckless and dangerous activity, especially when those who gamble with land have no real interest in farming and may not even dwell in the United States itself. This is why many states – including Wisconsin – have laws limiting corporate and/or foreign ownership of farmland. Chapter 710 of the WI State Statutes currently bars foreign corporations from owning more than 640 acres of land. Yet, these laws are now under attack.

In 2013 Wisconsin Gov. Scott Walker sought to overturn this 640 acre cap, arguing it violated the World Trade Organization (WTO), but he was defeated by widespread bipartisan opposition. It was later revealed that powerful real estate lobbyists – such as TIAA – were behind lobbying for this effort, since it limited their ability to bring in overseas capital for land grabbing. Possibly frustrated by this grassroots resistance, TIAA dumped its 3500 acres of WI cropland in 2016, but went on to gobble up more acreage elsewhere – including 13,000 acres in FL for sugarcane production, and another 50,000 acres in MS, devoted to growing rice, cotton, corn, and soybeans, through its Westchester subsidiary.

Sadly, TIAA’s land grabbing is not limited to the U.S. In Brazil, TIAA now owns over 800,000 acres mostly in the northeastern Cerrado savanna region, having evaded Brazil’s own law against foreign land ownership through a confusing array of domestic subsidiaries, with the result being massive deforestation aggravating climate change. TIAA also has massive stake in equally destructive palm oil plantations in Malaysia and Indonesia that have destroyed tropical rainforests, displaced indigenous peoples, and now threaten endangered species such as the orangutan. TIAA is a major bankroller behind the IOI Corporation, as well – another notorious palm oil developer – which has been implicated in human rights abuses in Nigeria and Uganda.

Indigenous peoples across the globe are still demanding return of their homelands stolen by colonial powers long ago, and 150+ years after the Civil War and the Emancipation Proclamation, formerly enslaved African Americans in the U.S. are still waiting for their promised “Forty Acres and a Mule.” If there is to be a genuine just transition in agriculture, there must also be agrarian reform enabling more people to farm – not less. Speculative absentee landowners such as TIAA should not be allowed to expropriate such a vital resource for their own private short-term interest. Like water and seed, land is part of the commons and should be made widely available to everyone.

You Can Help Hold TIAA Accountable for its Global Land Grabbing!

Many labor unions such as AFT, faculty/staff associations such as at UW-Madison, as well as college student groups have passed resolutions opposing this irresponsible investment of their funds – for a toolkit on how to launch such an effort at your campus, visit: https://www.stoplandgrabs.org/en-us/take-action/toolkit-for-faculty-and-student-action

And to join the broader worldwide campaign against speculative land grabbing and for better investment alternatives – especially those getting land back into the hands of a more diverse next generation of beginning farmers – check out these sites: