﻿Family Farm Defenders has been a longtime supporter of the Coalition of Immokalee Workers (CIW)’s struggle for justice for tomato pickers in the fields of Florida. 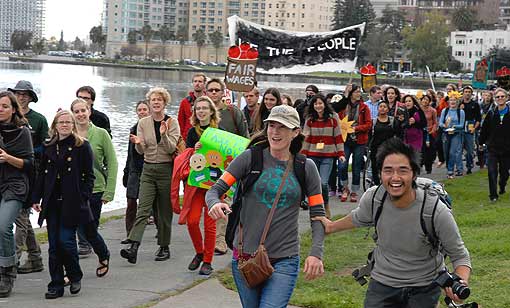 On the heels of last month’s huge march on Trader Joe’s corporate headquarters in Monrovia, CA, more than 200 Fair Food activists brought their energy, commitment, and colorful art to Oakland this past Sunday, winding through the city on a 2-mile march that ended at a local Trader Joe’s store. The march route started at the Marriott hotel in downtown Oakland, where a national Food Justice conference was being held, headed past the Occupy Oakland encampment, curved along Lake Merritt and concluded at the Lakeshore Avenue Trader Joe’s.

Marchers included representatives from Family Farm Defenders, the Food Chain Workers Alliance, the National Family Farm Coalition, and many other food system activists in town for the conference, all working on issues of food justice in one way or another (urban agriculture, access to healthy food, anti-hunger, health and nutrition, support for family farmers, fair trade, other food system workers, and more). And, as promised, Berkeley’s own Chez Panisse provided several baskets overflowing with organic fresh fruit, nuts and dates that fed marchers — and onlookers — along the way!

Click here for photos from Sunday’s big march in Oakland…

Or here for a slideshow of beautiful photos by KQED’s “Bay Area Bites” (who, by the way, also did the above video, and whose producer, Wendy Goodfriend, is responsible for the beautiful pictures, including the one at the top of this post!).