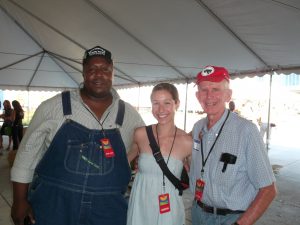 Prize – named in honor of John Kinsman, one of the founders and longtime president of Family Farm Defenders who passed away at the ripe old age of 87 on MLKJ Day, 2014.  John was not only an early pioneer of organic grass-based dairying in the Midwest, but was also a tireless champion of civil rights, social justice, and food sovereignty both in the U.S. and around the world.

To be considered for the prize, nominees must meet the following criteria:  engaged in own farm for less than 5 years; engaged in small scale livestock and/or vegetable and/or fruit production; market products locally; practice sustainable management of natural resources; promote healthy soil; conserve biodiversity; and support food sovereignty principles.

FFD board members then review the final applications and the winner(s) receive a $2000 cash prize and are recognized at an award ceremony held in conjunction with the FFD annual meeting.  This year’s award event is scheduled for early Dec. in Madison, WI (stay tuned for more details!)

Send the name of your nominee and their contact info (phone, email, address) to: familyfarmdefenders@yahoo.com  or leave a message/text at:  608-260-0900

Each year FFD also invites individuals and other supporters to help sponsor the John Kinsman Prize.  All sponsors are given honorable mention in publicity for the award ceremony, and those making a donation of $100 or more can also receive a complimentary ticket to the award banquet, as well as FFD t-shirt!

We hope that you will consider supporting this unique effort to honor the spirit of  John Kinsman, by not only nominating a worthy beginning farmer you may know, but by also providing financial support for this amazing celebration of food sovereignty!