Why We All Need to Work to Save the U.S. Postal Service! 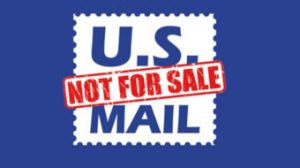 Having grown up in rural area the U.S. Post Office was almost a magical institution in my childhood memory. I would wait in anticipation for the oranges my grandma would often order from Florida that would arrive through the blizzard right to our farm in Minnesota just in time for the holidays. As an avid stamp collector, I also loved it when our friendly small town postal clerk would be sure to point out the newest commemorative issues to me. Having made many friends from travels around the world, the USPS was also a key link for me to the rest of the globe even in the age of the internet.

Many other people in the U.S. feel the same. In fact, the USPS has one of the highest favorability ratings (90+%) of all government agencies – certainly much higher than the FDA, USDA, or IRS… Since 1775 when Benjamin Franklin became the very first Postmaster General, the USPS has faithfully fulfilled the many goals that one can now find inscribed outside the entrance of the U.S. Postal Museum in Washington DC: “Bond of the Scattered Family; Enlarger of the Common Life; Carrier of News and Knowledge; Instrument of Trade and Commerce.”

Yet, today the USPS is under relentless privatization attack by those who clearly don’t appreciate the value of such a long standing public service that provides affordable universal reliable communication for all U.S. citizens. Under the pretense that the USPS is “bankrupt,” Pres. Trump and other neoliberal free marketeers are now hellbent to impose an austerity program that has already shuttered half of the country’s mail processing centers and led to longer delivery times. Any letter mailed in Madison must now go all the way to Milwaukee and then come back, adding 2-3 days on a typical delivery. One out of ten USPS offices have been put on the auction block, and over a third of those remaining have seen their hours of operation curtailed dramatically – this decision having the worst impact on rural areas.

To give but one example, when the USPS office was shut down in Prairie City, SD – saving the federal government a “whopping” $19,000 – the true costs were much higher for the folks living there. Like my post office in Rockville, MN (which – thankfully – survived), the post office in Prairie City, SD was part of the quilt that held that community together, but is now torn apart. As Daniel Beckman, a widowed farmer, told the Wall Street Journal for a Jan. 24, 2011 article, “that was the gathering place for people to come in the mornings, have a cup of coffee or can of pop, and visit – but we don’t have that any more.” Those who rely upon postal delivery of medical prescriptions must now wait several more days for the package, coming across state lines from Hettinger, ND nearly 40 miles away…

How did this quite preventable (and orchestrated) disaster come about? Well, one needs to go back to the late 1970s and early 1980s when the government greased the skids for private entities to undermine the viability of the USPS by granting special exemptions to UPS and FedEx to compete. In Canada the Canada Post at least has the mandate and authority to insure it remains economically viable – not so in the U.S. where the Postal Regulatory Commission – whose members are appointed by the president – can veto any price changes the USPS might propose to actually cover delivery costs. At just 50 cents to deliver a first class letter, USPS rates are among the lowest in the industrialized world, which is why its supposed competitors still rely upon the USPS to deliver so many of their own packages. Up to 30% of Fedex packages are actually delivered by USPS, and Amazon sends 40% of its packages through USPS saving itself up to 75% in shipping costs. Yet, when Pres. Trump tweets about Amazon “scamming” the USPS he somehow fails to mention the fact that it is his own political appointees who prevent the postal service from charging competitive market rates!

In addition to this stranglehold on pricing autonomy, the 2006 Postal Accountability and Enhancement Act severely restricts the USPS from expanding its services. Many other national postal services have become much more viable through innovation. For instance, Germany’s Deutsche Poste in 2010 began to offer hybrid mail services that give customers a choice between electronic or physical letters. The USPS now provides money orders, but many other countries – like Japan, New Zealand, and India – offer a much wider range of services such as public checking/savings accounts and low interest loans, through their post offices. One recent study suggested that the USPS could earn an extra $8.9 billion per year just by providing basic banking options to the 68 million Americans who now subsist on the fringes of the financial system. Since the 2007 – 2008 financial meltdown over a third of the zipcodes in the U.S. don’t have a functioning private banking option anymore…

VT Sen. Bernie Sanders has been a strong proponent of this new USPS role, stating “If you are a low-income person, it is, depending upon where you live, very difficult to find normal banking. Banks don’t want you. And what people are forced to do is go to payday lenders who charge outrageously high interest rates. You go to check-cashing places, which rip you off. And, yes, I think that the postal service, in fact, can play an important role in providing modest types of banking service to folks who need it.” Other Senators such as Kristen Gillibrand (NY) and Elizabeth Warren (MA) support such efforts to expand postal services into banking – as well as notarization and early voting!

The mass media often parrots the claim of privatization pundits that the USPS is in some deficit death spiral, but that is simply not true. Even former Postal Regulation Commission Chair, Ruth Goldway, admitted that: “The Postal Service has been a kind of cash cow for the federal government for the last 40 years.” The current fiscal crisis is artificially contrived in that the USPS is the only government entity that is now required to pay upfront for 75 years worth of projected retiree’s benefits. This is all due to an error discovered in 2002 that the USPS had overpaid up to $70 billion into one of its pension funds, and the federal government in 2006 mandated the USPS make payments of $5.4 billion for ten years straight out of its current revenue into a Retiree Health Benefits Fund (RHBF) to offset this surplus. As the USPS Office of Inspector General once explained, this is like a credit card company saying, “you will charge a million dollars on your credit card during your life; please include the million dollars in your next payment.”

The cumulative impact of this punitive campaign has been the loss of over 200,000 good paying civil service jobs. In response in Feb. 2015 a Grand Alliance was formed to save the USPS, bringing together 90+ organizations – labor unions, religious groups, consumer advocates, and farm organizations including Family Farm Defenders, Farm Aid, and the National Farmers Union. One of the latest tactics has been to outsource USPS functions to non-union “big box” retail chains like Staples, leading in 2017 to a nationwide series of coordinated protests in 50+ cities The American Federation of Teachers (AFT) on July 12th endorsed the Grand Alliance boycott against Staples – school supplies are a key market for Staples, accounting for up to one-third of its sales. Given this massive grassroots pressure, by Jan. 2018 the USPS terminated its deal with Staples, closing down the 540 “mini-post offices” already inside stores and nixing plans to expand them to all 1,600 locations.

In early Oct. 2018 there was another wave of pre-election solidarity rallies outside post offices in 100+ cities, proclaiming that the “US. Mail is Not for Sale.” When asked what her reaction was to the White House of Office Management and Budget (OMB)’s continued push to sell off the postal service, Janice Kelble, Legislative Grassroots Coordinator for the American Postal Workers Union (APWU) simply stated: “We won’t let the postal eagle be replaced by the vulture.” House Resolution 993 opposing USPS privatization has been cosponsored by 230+ Congressional representatives (both Democrats and Republicans) – and will no doubt gain more support among new incoming members. A viable robust postal service is not only critical to our nation’s economic health but also serves an important role in insuring equality and underpinning democracy. “Neither snow nor rain nor heat nor gloom of night stays these couriers from the swift completion of their appointed rounds” – such is Herodotus’ description of the ancient Persian mail service from 500 BC that has become the unofficial creed of the USPS today. This holiday season we should all take a moment to thank those tireless public servants who help tie our community together and resolve to protect and support their vital work into the future.