The price tags at the grocery store, particularly for food items, hide a lot. Over the past 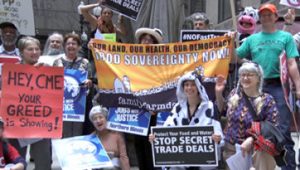 couple decades, they have hidden from consumers the increasing concentration in nearly every facet of the food industry. It’s the least our current government can do, especially as President Trump claims to want to fix trade, to investigate and perhaps punish food-industry monopolists who negatively affect farmers who receive unfair prices for what they sell and consumers who pay too much for what they buy.

Farmers and consumers don’t have to go to China to get “ripped off.” No, unfair trade deals regularly occur within the United States.

Consider the dairy industry. For instance, in 2007 Dean Foods settled out of court with a group of dairy farmers who argues that he agribusiness processor sought to eliminate competition in the Southeast. In 2011, Dean was ordered by the Department of Justice to divest of a plant and other assets associated with its acquisition of the Golden Guernsey processing plant in Waukesha. The claim was that Dean’s share of the school milk market had become too large.

Meanwhile, the largest dairy cooperative in terms of sales, Dairy Farmers of America, has settled out of court with farmers and consumers on numerous occasions. DFA’s history of monopolistic behavior is long, including an agreement to to pay $50 million in a 2009 lawsuit for alleged price-fixing in the Northeast; a 2013 agreement to pay $158.6 million to settle a class action lawsuit for the same issue in a 14-state region stretching from the Midwest to the South; and, also in 2013, an agreement to pay $46 million for manipulating prices at the Chicago Mercantile Exchange, the financial market company that specializes in derivatives and options trading.

More recently, in 2016, Land O’Lakes acquiesced after five years of litigation to pay part of a $50 million lawsuit that also involved Dairy Farmers of America, Dairylea, and Agri-Mark for their collective attempt to control milk prices.

Why would a cooperative hurt its members? The answer: profits. How do some cooperatives and processors make money? Through gaining market share, which can grow by exploiting the difference between what is bought from farmers and then sold to retailers.

How could this happen in the dairy industry? Just look at many of these big corporate cooperatives, and you will find that they are not run by farmers. Yes, farmers are on the boards of both Land O’Lakes and DFA. But who are the CEOs? Who are the managers in charge of research, mergers and strategy? These people are not farmers, but individuals who are lawyers and corporate executives with decades of experience, not milking cows, but working with pharmaceutical companies like Novartis and food and drink companies such as Nestle.

Do consumers gain from the expansion of corporate control of the food chain? No. In 2012 Food and Water Watch issued a study noting how concentration in the pork, dairy, poultry and vegetable industries not only drives prices down for farmers, but also forces consumers to pay more than what they should for what they find on supermarket shelves. According to the National Farmers Union, farmers receive just $0.14 of every food dollar, with the vast majority of sales heading to marketing firms, retailers and processors.

Concentration in agriculture – not just in dairy, but also in seeds, poultry and beef – prompted a series of workshops in 2010 between the Department of Justice and the United States Department of Agriculture to discuss the nature of competition – or rather, the lack thereof – in agriculture. From Wisconsin and Colorado, to Alabama and Washington, D.C., government officials heard stories and collected testimony from farmers and consumers on the lack of market transparency, anticompetitive mergers, and bid-rigging (when buyers of agricultural commodities agree to limit competition by agreeing on prices). The report issued after the workshops helped clarify central elements in antitrust law, yet failed to provide a strategy for moving forward.

Now, during a time of record farm bankruptcies, is the time for the government to launch a serious, concerted investigation on food monopolies. Farmers and consumers are losing trade deal – not with the Chinese, but with the agribusiness industries that have become too powerful and too large.