Got Anti-Trust? Protest outside the CME on Thurs. April 18th against Food Monopoly and for Food Sovereignty! 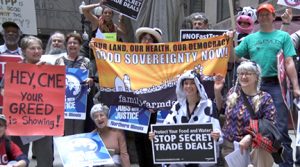 International Day of Peasant Struggle with a protest to demand anti-trust action against the food giants outside the Chicago Mercantile Exchange (CME)!

Followed from 12:30 pm – 1:30 pm by a march to the IL State Attorney General’s Office (100 W Randolph St) to deliver a letter in defense of family farmers and to call for national anti-trust enforcement!

Then from 3:00 pm – 4:00 pm join us for a community food sovereignty forum at the Steans Center of DePaul University – Lincoln Park Campus (2233 N. Kenmore)

In solidarity with this speak-out, people across the U.S. are being urged to contact their own state attorney general’s office in support of stronger anti-trust enforcement against the agribusiness giants that now dominate our country’s food system to the detriment of farmers and consumers alike.  Even if the federal Department of Justice (DoJ) is currently unwilling to enforce the law, there is still power granted to state elected officials to take action in the public interest.  Just such grassroots political pressure back in the mid 1990s helped shut down the corrupt Green Bay Cheese Exchange in WI.  Unfortunately, speculators just consolidated their activities at the CME, which has now become the world’s largest commodity market – with even less government oversight.
We especially encourage anti-trust supporters in some key states to call their attorney general’s office on Thurs. April 18th (all of these offices will have received our demand letter on this issue by then):
California:  Xavier Becerra  #(916) 445-9555 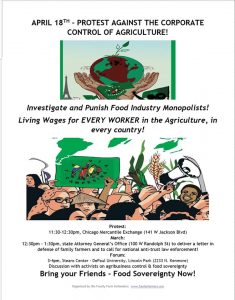 If your organization would like to sign onto the anti-trust letter being delivered to State Attorney Generals across the country on Thurs. April 18th, please let FFD know!  You can read the full letter here:   Anti-Trust Letter to Attorney General 2019

And for more on what is so wrong with monopoly power over our food/farm system, here is the flyer we will be distributing outside the CME to share:   CMEFactsheet