Making a Statement With Our Tractors – If Wisconsin’s public-sector workers lose their collective bargaining rights, then dairy farmers will lose as well 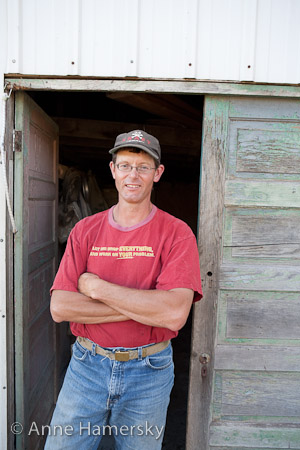 Madison, Wisconsin is truly an amazing scene of beauty — as well as unprecedented political mobilization. Among the throngs of demonstrators, you’ll find Democrats, Republicans, independents, progressives, libertarians, and socialists walking together, discussing real solutions while sowing the seeds of solidarity.

I’ve traveled from France to Malawi to stand with peasants, farmers, and farm workers, but leading the March 12 tractorcade to Madison was one of the most inspiring things I’ve ever done. Riding to Madison’s Capitol Square required a daylong commitment from the 51 farmers on their tractors of every size, color, and make — along with a few manure spreaders, a fire truck, and a self-propelled combine for effect.

I don’t know when I’ve ever felt as welcome as the moment when our tractors drove through the crowd of 100,000-plus people waving caps and flags, yelling, “Thanks for being here, farmers!” The energy and spirit of camaraderie were overwhelming.

This wasn’t just about standing up for collective bargaining rights — it also proved that public and private sector workers will stand together to build a sustainable community. Governor Scott Walker’s attack on workers’ rights will harm rural schools, communities, and churches. Rural communities, like my town of Kendall, Wisconsin, are the true source of this country’s wealth. The fate of these communities is tied intricately to the fate of workers everywhere.

Wisconsin is a dairy state — one in five Wisconsinites is employed by the dairy industry — whether that’s on a farm, in a cheese factory, at a farm equipment dealership, or driving a milk truck. Today, 80 percent of our dairy farmers sell their milk through cooperatives, which use collective bargaining to establish milk prices for their members.

As it is, dairy farmers are losing money because their cooperatives aren’t standing up to the processors buying their milk, such as Kraft and Schreiber Foods. If public-sector workers lose their collective bargaining rights, then we co-op farmers will lose our rights too. We’ll be paid even less for our milk. That’s bad for Wisconsin, and it’s bad for the poor, the elderly, the sick, women and children, and farmers everywhere.

In many industries, workers don’t have collective bargaining rights, so they can’t demand fair wages. However, since 1938 the Fair Labor Standards Act has guaranteed almost all Americans a minimum wage, time-and-a-half for overtime in certain jobs, along with child labor restrictions that help give kids a fair shot at getting a decent education. Corporations, and now governments, are chipping away at these rights and protections. Can this really be happening in the United States? Without fair wages and safe working conditions, what have we accomplished as a nation in the past 200 years?

Classified ads in a recent issue of Agri-View, a Wisconsin farm journal, listed 21 farms for sale, with dairy herds ranging from 20 to 180 cows or goats. It’s nothing new: nationwide, the consolidation of dairy farms is dramatic. More than half of them disappeared between 1992, when we had 131,509, and 2010, when only 53,127 were left.

When those 21 farms are sold, at least 21 families will move somewhere else, leaving fewer farmers supporting local businesses and the tax base that funds community schools and infrastructure. As the tax base shrinks, school districts eliminate programs and local businesses close, leaving even fewer places for people to work and to buy goods. Is this really good for America or its bottom line?

State governments need to realize that they’re not just hurting civil servants when they eliminate bargaining rights, but everyone: family farmers, fishermen, and farmworkers — the people who provide our food — as well as the communities in which these people live and pay taxes. It’s time for all of us to stand together, raise our voices, and demand our rights. The strength of our families, our communities, and our nation depends on it.