Special Fund Raising Appeal! Support Friends of the Central Sands in Their Historic Legal Challenge to the Richfield CAFO 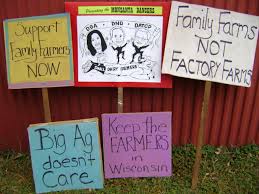 It has been two years since Family Farm Defenders (FFD) joined the Friends of the Central Sands (FOCS) in challenging the construction of a large confined animal feeding operation or CAFO in the Central Sands of Wisconsin. We challenged the factory farm due to its potentially devastating consequences on local family farms, the region’s traditional farm and tourism economy, and most significantly the degradation of the region’s water quality and quantity.

The Richfield CAFO, as it is known, would initially house nearly 5,000 animals with the prospect of growing significantly larger. The dairy’s current high-capacity well permit approval caps the dairy’s annual water withdrawals at 72 million gallons, yet evidence was submitted to the WI Department of Natural Resources (DNR) that a lower amount of annual withdrawal-52 million gallons-would lower lake levels by an average of 2 inches and would reduce stream flows by 5%. The DNR stated that it did not view these reductions as a “significant adverse environmental impact.”

While recognizing and agreeing with the impact based on 52 million gallons, the DNR actually approved an amount 2.5 times that amount. This draw down has the potential to negatively impact nearby Class 1 trout streams including Fordham Creek, Little Roche-a-Cri Creek, Chaffee Creek, and Tagatz Creek and their associated riparian wetland habitat. Additional research has shown that pumping at the rate of 131 million gallons per year will reduce stream volumes in some sections by 10% or more. Of more significance however is the impact of the permitting process and reviewing these applications in consideration of other high capacity wells in the same general area which have proven to cause negative impacts on lakes, streams, wetlands and other private wells.

While each of our three law suits is designed to provide increased environmental protection and oversight, our suit concerning the high capacity wells is aimed at forcing the DNR to put into practice what the Wisconsin Supreme Court directed the DNR to take into account, when they permit big wells, anywhere in the state, how the lakes and streams in the area will be affected by the high- capacity wells. Up until now the DNR has never approached high capacity wells this way. This irresponsibility is not due to the DNR’s lack of scientific knowledge or technical ability; it is one of political will and the lack of clear direction from the courts. We and many others believe this legal challenge may be the best opportunity to protect ground water quantity and quality in Wisconsin, whether it be for family farms, domestic wells, or aquatic ecosystems.

Friends of the Central Sands is leading the effort to stop this proposed Richfield dairy and has filed several suits in response to the DNR’s approval of the CAFO’s permits.  These suits address three key components; the production site plans and specifications, the WPDES permit which outlines the spreading of the waste on thousands of nearby acres, and the high capacity wells.

Our goal is that our legal challenges will put an end to the current out of control drilling of new high capacity wells and lack oversight of CAFOs in the Central Sands region of Wisconsin, result in a reassessment of how groundwater is used and regulated in the state of Wisconsin, and ensure that CAFOs are subject to reasonable limits in their operations and manure-spreading.

With your assistance we will continue to lead the way in saving the magnificent waters of Wisconsin.  This fight is no longer about a single CAFO but has wide reaching impacts affecting the way industrial agriculture dominates decision processes to the detriment of other citizens and family farmers.

To date we have prevented, for now, the drilling of the two high capacity wells requested by Richfield Dairy and thus the construction of the CAFO and resulting nutrient pollution. However, costs are mounting daily and after two years our small organization is not able to support these challenges alone as we continue to seek change.

FFD has provided much needed logistics assistance but it is time to seek financial assistance for the Friends of the Central Sands, as well.  We are reaching out to you for a onetime special appeal.

You can donate by visiting: www.FriendsofCS.org or by sending a check to:

Your help is much needed and appreciated.

This entry was posted in Factory Farms. Bookmark the permalink.