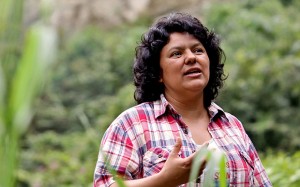 For more information, contact:Lisa Haugaard, Executive Director, Latin America Working Group lisah@lawg.org
Over 200 Organizations Call on Secretary Kerry to Support Independent Investigation into Murder of Honduran Environmental and Indigenous Rights Activist Berta Caceras
Over 200 human rights, faith, indigenous rights, environmental, labor, and nongovernmental groups sent an open letter to Secretary of State Kerry expressing “shock and deep sorrow regarding the murder of Honduran human rights and environmental defender Berta Cáceres,” the founder and general secretary of the Civic Council of Popular and Indigenous Organizations of Honduras (COPINH). The organizations urged “a response from the State Department that is not business as usual but a profound change of direction towards improving the abysmal situation of human rights in Honduras.”Berta Cáceres, winner of the prestigious 2015 Goldman Environmental Prize, was a visionary indigenous and environmental rights leader. She championed efforts to protect indigenous peoples from large-scale development projects that are being advanced in Honduras without consultation of communities and without concern for the environment. She was killed on March 3, 2016 by armed men who broke into her home in La Esperanza, department of Intibucá, Honduras. Mexican environmentalist and journalist Gustavo Castro Soto of Otros Mundos Chiapas/Friends of the Earth Mexico and the Mesoamerican Movement against the Extractive Mining Movement was also wounded in the attack. The organizations urged Secretary of State Kerry to support an independent international investigation led by the Inter-American Commission on Human Rights into Ms. Cáceres’ murder and to urge that the Honduran government invite and fully cooperate with such an investigation. They also urged the Secretary to press the Honduran government to comply with the precautionary measures granted by the IACHR on March 5 and provide immediate, effective, and carefully consulted protection to members of COPINH, members of Ms. Cáceres’ family, Mr. Castro and all witnesses in the case.
The organizations support the call by Senator Patrick Leahy to abandon the Agua Zarca dam project and to protect the territory that Berta Cáceres devoted her life to protecting. They ask the Honduran government to recognize that “the pace and process by which it is facilitating the extraction and trade of natural resources by national and international investors is contributing to social conflict and human rights violations.” They urge the Honduran government to meet its obligation to provide prior, free, and informed consultation of indigenous communities. In addition, the organizations call on the U.S. government to ensure that no U.S. assistance and support for multilateral bank projects promote or permit development projects without meeting the obligation for prior, free and informed consultation with indigenous communities, nor without ensuring meaningful consultation of all affected communities and that strong human rights, labor rights and environmental safeguards are in place.Finally, the organizations urge the State Department “to suspend all assistance and training to Honduran security forces, with the exception of investigatory and forensic assistance to the police, so long as the murders of Berta Cáceres and scores of other Honduran activists remain in impunity.”